Standing Out to Fit In

When you dive or snorkel at Amed diving sites you are not just seeing some of the most pristine coral reefs on the planet, but also some of the most diverse collection of marine creatures. Even veteran divers tell us they see many species on Amed´s reefs that they have only read about. Here guests encounter a wide variety of species, many of which have developed fascinating adaptations that result in dramatic colours, shapes and sizes. From the small and hidden to the flamboyant and unusual, the coral reefs of the area of Amed is home to more than 900 fish species, each uniquely adapted to it's chosen home environment. During a single trip, on Ameds reefs - like here in Gili Selang - guest observed and recorded 426 different species of fish, and never went below 15 meters during any dive!

The intensity of the male squarespot anthia's coloration is amazing. Males are predominantly pink with a lavender belly and have a purple square spot on each side, where as the females on the other hand have a less conspicuous (for an Anthia) yellowish orange coloration with a lavender belly. The male’s acrobatic swimming display acts as a signal to rival males of his territorial boundaries, while also enticing another potential mate for his harem. But before this male was a he, it was a she. Confused?
Anthias are protogynous hermaphrodites, meaning they start out as female only to become a male when the time is right, such as when a colony loses too many males. When this occurs, the older, more dominant female’s reproductive organs undergo a transformation, identified by a change in the fish’s coloration to a more vibrant lavender and purple.

Follow along for a glimpse at some of the spectacular reef denizens—such as this Pygmy seahorse—that have adapted to fit in, but also stand out on Amed 's reefs.


Drifting down the wall in Amed a few minutes into the dive, our guide locates a pygmy seahorse and we get off several great portrait shots. Next on our list is another pygmy seahorse.
Denise
Denise's pygmy seahorse (Hippocampus denise) is a species of fish in the Syngnathidae family. Originally described from Indonesia and other places. Pygmy seahorses are among the most well camouflaged species in the oceans, being very difficult to spot amongst the gorgonian coral they live in.
Hippocampus denise is tiny, growing only to a total length of 1.5 cm. It is orange and resembles the pygmy seahorse, Hippocampus bargibanti, though its tubercles are less distinct. Wikipedia
Did you know there are seven species of pygmy seahorse? Four of these are found on the reefs of Bali. There are the two species of gorgonian-associated pygmies (Bargibant’s and Denise’s), as well as the brown Severn’s and Pontoh’s pygmy seahorse. Pontoh’s pygmy is actually quite common at Bali and can be identified by its predominantly white colouration and small size (maximum 1.6 cm). It’s usually found living in or around patches of Halimeda algae.

Perhaps the most fascinating of coral reef fish adaptations are the variety of brilliant and bizarre color patterns that adorn them. Many fish often take on the color patterns of their environment, either to sneak up on prey, or to hide from predators, like this black frogfish nestled amongst the sponge, coral, hydroids and tunicates– yes, that is a frogfish!

Antennarius maculatus, also known as the Warty frogfish or Clown frogfish, is a Marine fish belonging to the family Antennariidae.
Antennarius maculatus is a small sized fish which grows up to 15 centimetres. Like other members of its family, it has a globulous, extensible body, the soft skin is covered with small dermal spinules. The skin is covered with numerous small wartlike protuberances. Its large mouth is prognathous and allows it to consume prey its same size. The coloring of the body is extremely variable from a specimen to another one because they always tend to match their living environment. Frogfishes have the capacity to change coloration and pigment pattern in few weeks, average 2 to 5 weeks only. However, the dominant coloration goes from white to black passing through a whole range of related nuances like cream, pink, yellow, red, brown and also often with dark circular spots and/or with saddles. Wikipedia


While color can be a key component for finding a mate, for some species like the frogfish above, drawing attention visually is not necessarily the best form of flirting. Frogfish survive by making themselves as inconspicuous as possible, so when it comes time to broadcasting their intentions, they do so chemically, by releasing distinctive scent or ‘pheromone’ into the water. This is handy as subtlety is important when there are plenty of other species of fish that would also happily make you a meal.

One of the most bizarre fish you may ever encounter is the Pegasus sea moth. As these small crustacean eaters move along sandy bottoms, with large wing-like
pectoral fins extended while using their pectoral fins in a waddling motion, they seem more bird than a fish. The fish's beak-like snout accentuates this illusion. The Pegasus sea moth can change colors based on its surroundings, much like the chameleon, and every so often, they shed their skin like a snake.

A snake eel spends most of its life buried in sand or rubble, with only its head protruding from the seafloor. Many snake eels have very small fins or lack them entirely as this makes it easier to burrow. They are patient hunters, waiting for a small fish, a foraging octopus or a careless crab to ample past. When a prey item gets too close, it lunges forward and latches on with its strong jaws and many sharp teeth. When it wants to change ambush sites, it usually does so after dark. A lucky diver who sees one relocating during a night dive may confuse it with a sea snake, as many types of snake eels will display a similar spotted or striped coloration to deter predators.

The name cuttlefish is misleading, as they are not a fish but an invertebrate - member to the squid and octopus family. When it comes to both standing out and fitting in, they have it all going on. Masters of camouflage and disguise, cuttlefish use their color changing ability to blend in with the reef background when they want to sneak up on unsuspecting fish or evade a larger predator.


This evasive tactic of imitating the environment makes them hard to spot, sometimes even when looking straight at one. Then in a flash, they can stand out like a neon sign, changing hues and color patterns with mind-boggling speed. Once discovered by a diver or snorkeler, a cuttlefish will watch with a seemingly intelligent eye, waving his tentacles and—for those who wait calmly, patiently and quietly—appearing to seek animal-to-human interaction. Cuttlefish are regulars on Amed's reefs, but you have to look closely to find one.

Most fish found on coral reefs are ray-finned. These skeletal arrays in a fish's fins provide the stiffness needed to serve as paddles for locomotion or stabilizers. Sometimes, these stiffer stabilizing fins can become a form of defense – and act as a distraction, serving as a warning as well as partial camouflaging. The lionfish has several adaptations; for example, his spinal array is both wickedly sharp and carries a brutally painful toxin, whereas his pectoral fins are soft and feathery serving both to confuse and broadcast to a predator “don’t mess with me.”
Fish can use color patterns to mimic their surroundings and create camouflage. Sometimes, thise patterns are so elaborate that they become art. The tasseled scorpionfish has adapted to look like a part of something growning on the sea floor. But its flamboyant coloration and elaborate fin appendages are so vivid that they almost seem to defeat the initial purpose of not standing out. And just as each human fingerprint is unique, so too are many of the colorations and patterns of the reef dwellers. Where one variety will parade about like a peacock in a riot of colors, other species, such as the crocodilefish, have developed cryptic markings and hues for the dual purpose of avoiding larger predators through camouflage, and ambushing unsuspecting prey that swims by.
Open-water species often display simple counter-shaded colorations such as a light underside and a dark or blue-gray back, rendering them less obvious when seen from above or below. Reef species, on the other hand, take a different tact, featuring an array of colors and patterns that either boldly stand out, or masterfully mimic the surroundings of the reef they call 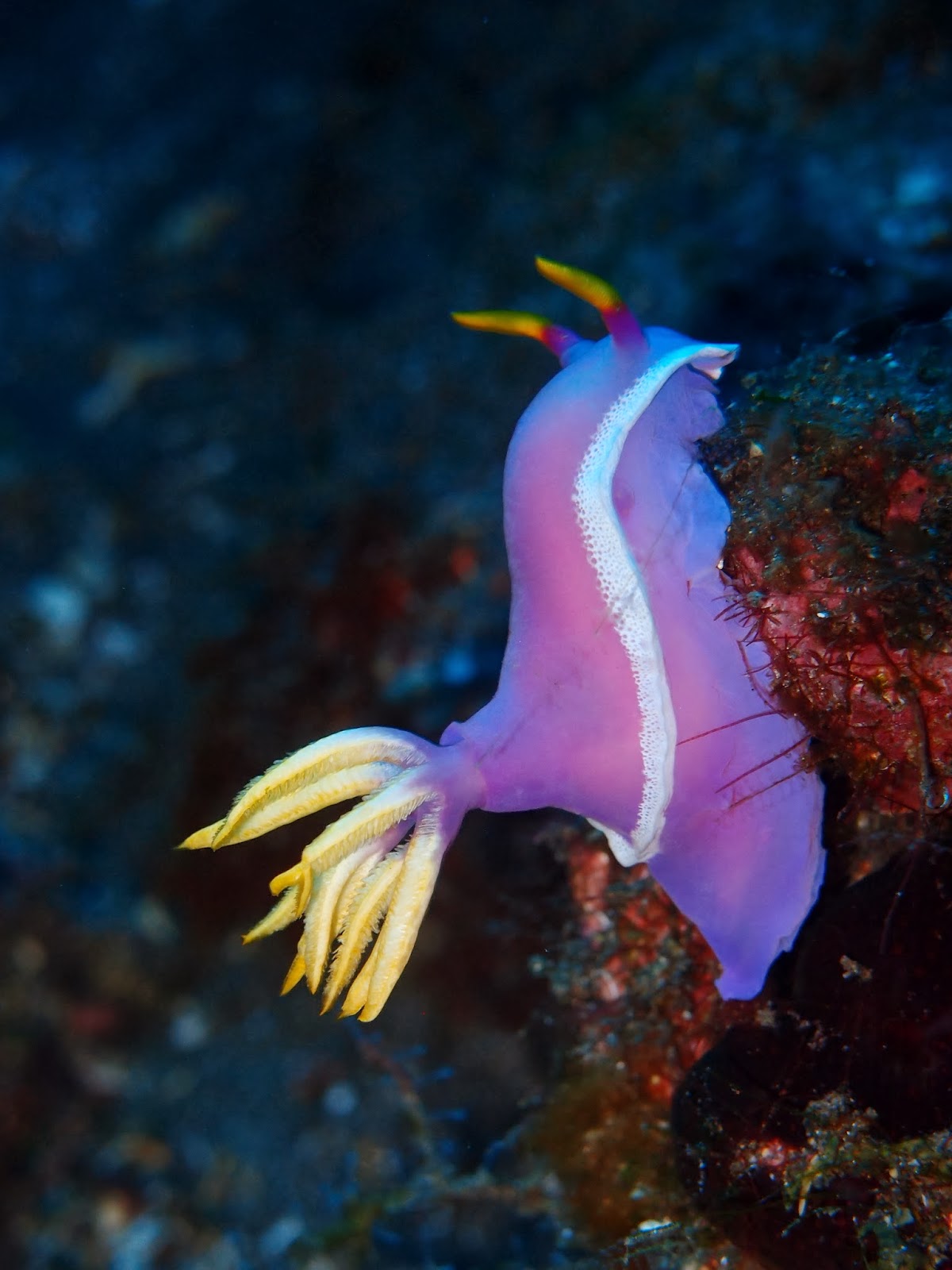 home. Many of these colors and patterns are a form of adaptation - from the obvious to provide concealment, or to openly broadcast “I am here.” Of course, the reasons behind some of the more flamboyant colorations are not always easily identified.

Thank you for sharing some diving experiences with Amed Scuba Bali Diving Center.
If you want to know more about the diving sites in and around Amed, it is a pleasure for me to share this experiences together with you.


If you are interested in coral reefs and how they exist have a look at this blog page:
Reef Ecology

If you love to dive with Amed Scuba?
We would love to introduce you into the highlights of our Bali Diving Tour.
From a macro festival with pygmy sea horses, pegasus- or frog fishes with ghost pipe fishes etc. to a wide angle festival at the USSAT Liberty shipwreck in Tulamben the variety in Bali is exciting! Drop offs, drift dives, shipwrecks, untouched coral gardens and still more for example in Crystal Bay where the visibility is mostly awesome to meet the famous Sunfish (Mola mola), the largest bone fish in the world with a span as large as 4 meters. One think we should not miss! We should meet the awesome and huge Manta rays in Nusa Penida! Amed Scuba offers you the best diving sites in Bali!
If you are
interested in diving with me and with our team of Amed Scuba contact our office at halloscuba@yahoo.com or contact me directly under sbick@gmx.de in engish or german language.  Hope to see you in Bali!
http://www.amedscubabali.com