From Dust Till Dawn

It is a new day on the coral reef and the purple dust can be seen on the horizon. It is the time between the night and the promisses of a new day. The time of Amed Scuba´s early morning dive in the USS Liberty shipwreck. The dive begins as the sun rises slowly overhead. It is a calm and peaceful moment of the day as the vertebrata and invertebrata of the night not jet find their niche to sleep off their night time activities, while the creatures of the day slowly wake up hungry and rise.
Having bagged the first image of the day we move to the Liberty wreck in calm chrystal clear water and spots a group of huge bumbhead parotfishes lazily waiting for the rest of their group to move to their food places. Suddenly they move together away from thir night time hiding place in the Liberty shipwreck and the fishes are prepaired for another day of grazing the algae from the reefs and peered out to check the horizon for a tasty patch of food. Parrotfishes are a
group of about 90 species traditionally regarded as a family (Scaridae), but now often considered a subfamily (Scarinae) of the wrasses. They are found in relatively shallow tropical and subtropical oceans throughout the world, displaying their largest species richness in the Indo Pacific.They play a significant role in bioerosion. Parrotfish are named for their dention, which also is distinct from that of other labrids. Their numerous teeth are arranged in a tightly packed mosaic on the external surface of their jaw bones, forming a parrot-like beak with which they rasp algae from coral and other rocky substrates (which contributes to the process of bioerosion).
Maximum sizes vary within the family, with the majority of species reaching 30–50cm in length. However the green bumphead parrotfish can reach up to 1.3m. Although they are considered to be herbivores, parrotfish eat a wide variety of reef organisms, and they are not necessarily vegetarian. Species such as the green humbhead parrotfish (Bolbometopon muricatum) 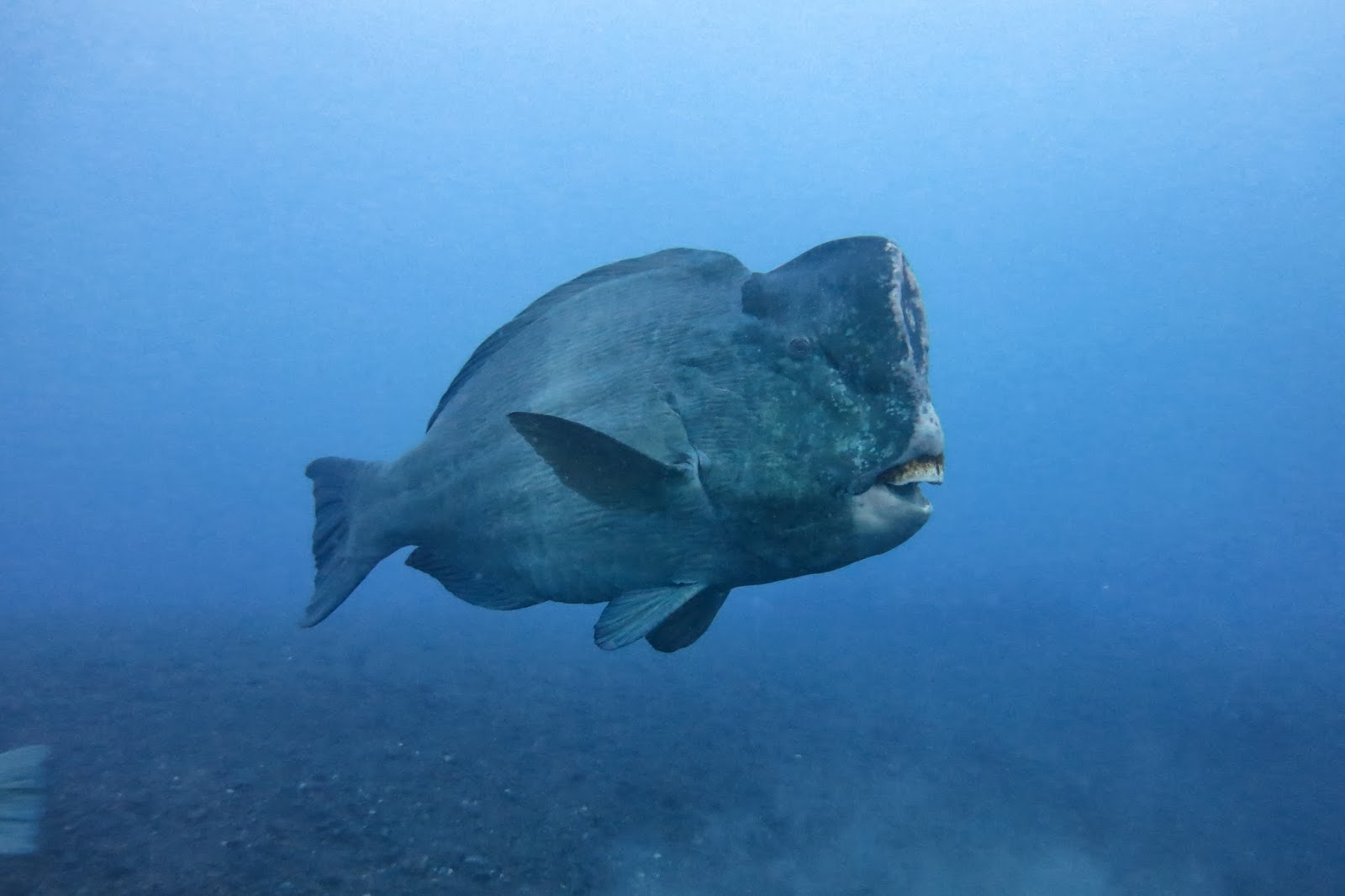 include coral in their diets. Their feeding activity is important for the production and distribution of coral sands in the reef biome, and can prevent algae from choking coral. One parrotfish can produce 90kg of sand each year. (Wikipedia )
As the sun rises higher in the sky the bumbheads have disapeared and another hunter of the nightfind his niche. A moray eel retreats into his burrow to awit a darker moment and recommence his hunting. The largest in terms of total mass is the giant moray (Gymnothorax javanicus), which reaches 3m in length and 30kg in weight. It is so amazing to watch this giant swimming around the wreck of the Liberty.
As the sun crept over the reef crest, we came across a school of adolescent golden batfish cruising the wall. In this species, the juvenile is very similar to the adult form. This isn’t the case for some other species of batfish where the juvenile Pinnate mimics a toxic flatworm, the juvenile Batavia is black and white striped to hide among feather stars and the juvenile Circular, which is an almost exact replica of a leaf.
The Lion fish wake up and we see him as he hovers above the corals, looking for a tasty morsel to become his next victim. The common lionfish is among the most beautiful fish on the coral reef. Vividly contrasting coloration warns predators away from its highly venomous spines. Lionfish belongs to the family Scorpaenidae, scorpionfish. The same like leavefish, crocodile fish...Most species in this large family are well comouflaged by flaps, tassels and coloration matching the bottom terrain. And all the members of this family have one thing in common – They are all venomous to a greater or lesser extent.

Predatiors lurking, already awaiting thir breakfast, little frogfishes are difficult to spot, completely disguised as a part of his surroundings. It lives in perfect camouflage. Frogfish coloration varies from species to species, and even whithin the same species.
Textures range from smooth velvety skin to algea or sponge covered warts, and even spots that look just like those of sponge.

With the creation of nudibranchs, nature expresses its wildest indulgence of colors and forms. There are
more than 3000 described species of nudibranch, with new ones being identified almost every day. Their size ranges from just a few millimeters to around 300mm. They can be found in all the oceans of the world and within most habitats, but are more abundant in shallow, tropical waters such as Bali. Even the egg ribbons can come in an amazing array of size, shapes, colour and design, depending on species, and are usually laid on or near food sources.
Beschreibung der Tauchgebiete in Tulamben in deutscher Sprache: http://amedscuba.blogspot.de/2010/04/tauchen-in-bali-tulamben.html 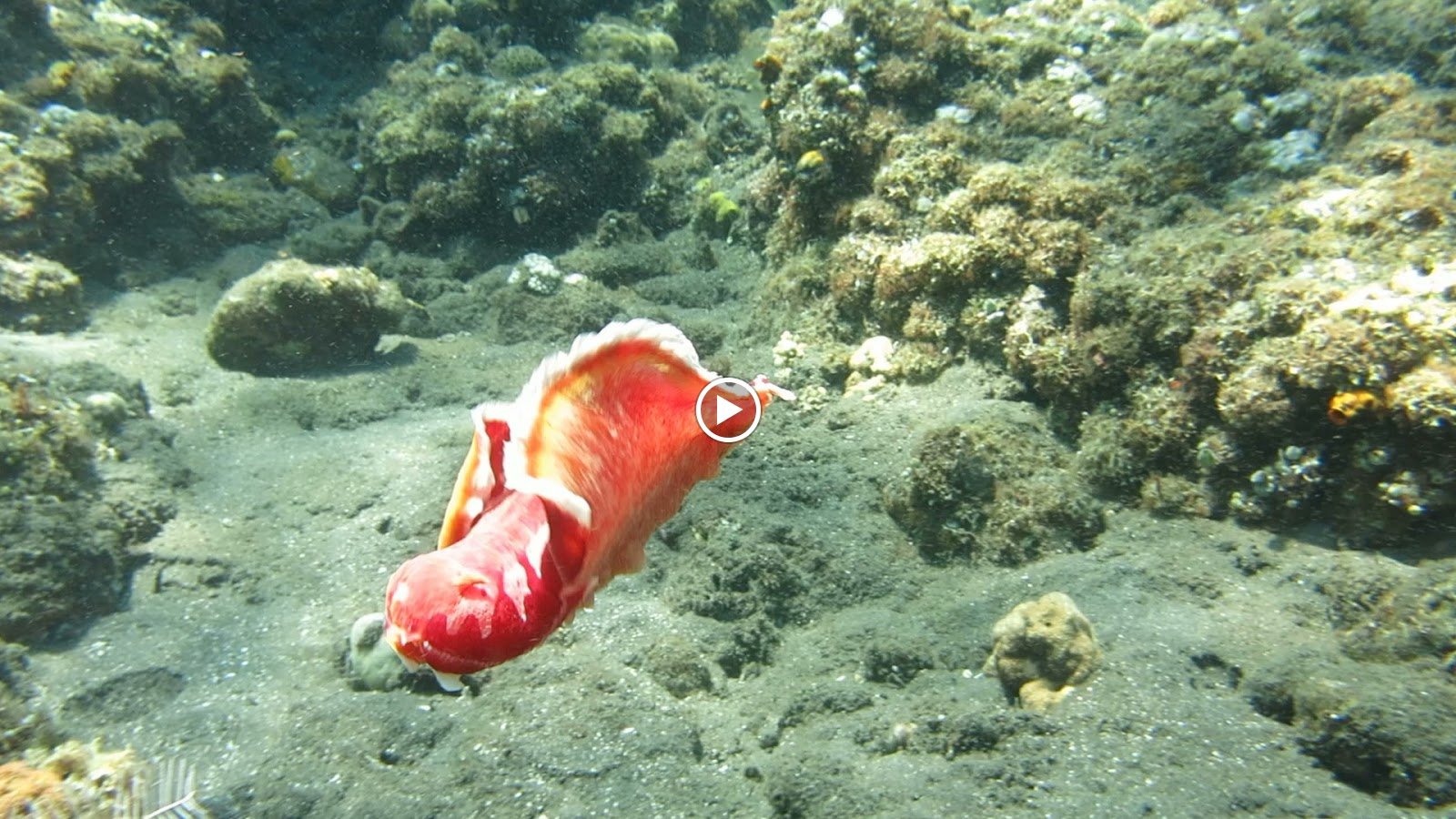